Young people from North Ely Youth Centre, Petherbridge Road, Ely, Cardiff have created a visually striking new mural to signpost a new heritage trail that will soon be developed around the Caerau Iron Age hillfort as part of a Heritage Lottery Fund (HLF) All Our Stories grant.

The creation of the heritage trail is led by Cardiff University’s CAER Heritage Project team in partnership with community organisation Action in Caerau and Ely and St Fagans National History Museum. 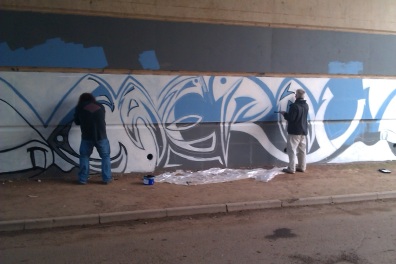 To set the context, the young people visited the Iron Age reconstructed hillfort at Castell Henllys in West Wales. Here they engaged in two dynamic workshops devised by Paul. The first, a digital photography activity, was based on the micro-montages of street artist Slinkachu and the other was a variation on the eco-graffiti activities that the artist has used to great effect during previous stages of the project. In this case the young people left their outlines on the side of the fort – a biodegradeable impression of their visit.

Back at the youth centre, the young people engaged in two days of drawing workshops which were used to gen

erate letters and figures that Paul and Ian developed into finished designs for council approval. The young people were then given a choice of five designs based on their ideas and motifs – with Ian’s design getting the vote. The mural design features two Iron Age Round houses, ‘Ely beans’ and graceful ‘celto-graffiti’ lettering spelling out the word Caerau, which means hill-forts in Welsh.

The A4 sized mural design was then transferred at full size – over 15 metres in length – onto the underpass and painstakingly rendered in masonry paint. The young people from the youth centre lending a hand with the final stages of the painting and adding their own graffiti ‘tags’.

Passers-by have already made a number of very positive comments about the mural and it is apparent that the artwork functions brilliantly as a vivid, direct, contemporary connection

to the site’s ancient heritage.

When you visit, look out for the Banksy style rats devised by Oliver Davis – they’re ‘sick’