Last Saturday I was lucky enough to have the opportunity to represent CAER heritage at the amazing Ely Festival alongside Dave, Mel, and Alex. Digging Caerau is not just about a bunch of archaeologists excavating a hillfort, engaging with the local community and helping them to discover the rich history on their doorstep plays a huge role and many locals come up to site to volunteer or just to see how things are coming along each day. The Ely festival gave me the opportunity to leave the site and actually spend the day right at the heart of the community 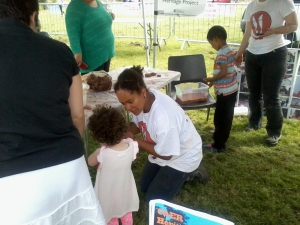 We arrived before the festival began and to unload the van and set up our stall, making it look as inviting and interesting as possible. We set up plenty of photographs, a colouring table for the little ones, a finds table with lots of information about the site, the heritage trails and photo booklets of Ely and Caerau in the 1980s, and an iron age pot making station where I ended up spending most of the day.

There was just enough time for Mel to give me a quick pot making lesson before the visitors started arriving, a slow trickle at first, then as the day went on, we got busier and busier. Although the CAER Heritage project has been up and running for a few years now, many of the visitors to our stall, although familiar with the hill and no idea about the historical importance of the site. Everybody was interested to hear about the excavation and how they could get involved and even more were keen to take a look at the arrowhead many had seen on BBC news a few days earlier!

While the adults and some of the younger visitors learned about exciting past of their community, most of the children were immediately drawn to our make your own Iron Age pot table! Although I expect the interest had more to do with the opportunity to get messy and make something they could take home than learning about the Iron Age… 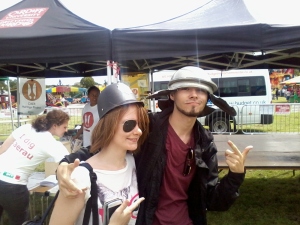 Although Mel had shown me two techniques that morning in her pottery master class, as I am not a particularly creative person, and the table was usually crowded with young children all extremely eager to make their own pots, I definitely went with the easier stick your thumb in the ball of clay and pinching the edges into a pot nine times out of ten! Some of the pots made were definitely less… functional looking than others, and one adorable little boy went for a dinosaur instead despite my insistence that there were no dinosaurs in the Iron Age, but they all seemed to have fun giving it a go! And it wasn’t just the kids who got involved, one man gave the children a run for their money, shout out to you Lyle!

Making pots with dozens of excitable children (and Lyle) and engaging with the community is definitely equally as tiring as spending the day mattocking as it is all go all day, and I went home just as mucky at the end of the day, but the experience was also just as gratifying. As amazing as it is to dig and to actually discover parts of the past, hearing a child ooh and ah as they realise just how long ago the iron age was (way before TV and computers!), or seeing the interest and amazement on people’s faces as they hear about the history of the place they have lived in all their life and never known about and possibly discover a new interest in the past, is a uniquely rewarding feeling.

P.S. to all the parents I reassured that the clay would come out in the wash, I have since learned that I may have been mistaken, but at least you have a lovingly made pot to put on the mantelpiece. Sorry!